After an anterior cruciate ligament (ACL) rupture during what became my final basketball game, I picked up running in August 2010 as part of my recovery. I never stopped running ever since… except when I was flirting with (overtraining?) injuries just before or after race days.

After 2 years of more or less consistent running, I marked the DVV Antwerp Marathon in the spring of 2013 as my marathon debut. I was happy to complete my first marathon slightly above 3 hours. However, I was far from satisfied with the overall preparation, because I was unable to complete the predetermined training plan due to pain in and inflamation of my achilles tendons. Moreover, I needed to rely on anti-inflammation medicines to cope with running while training and on race day.

Afterwards, I was determined to complete a second marathon whenever I became an injury free runner. Therefore I consulted UZA s.p.o.r.t.s and completed an endurance and gait analysis test. This confirmed that my arch supports turned me into a neutral runner with a midfoot stride.

After completing my third Antwerp 10 Miles in 2016 after yet another round of small aches, I decided to restart working on my running form. Therefore I rewatched all Newton Running Form Friday exercises, reduced my training load and started these shorter runs only after performing these drills. During a city trip to New York, I bought my first discounted pair of Newton Running Gravity IV shoes.

In Januari 2017, I started running all my training sessions with this new pair of running shoes, just like I always did, and thus disregarding the advice to break in the new shoes gently. After a couple of runs I got pain in my achilles tendons and on the soles of my feet. I took a break to get rid of the pain. Then I started again for the second time. This resulted again in pain and I took rest again to prevent further injury. When I started for a third time, the pain immediately returned and I started doubting the Newton Running shoes. So, I decided to swap back to my old pair of running shoes. Both during and after the run I was pain free. Moreover, I was able to complete the training schedule with my previous pair of running shoes. I finished the DVV Antwerp 10 Miles race just in the top 1000 in a decent time of 1:08:25. Afterwards I decided to give the Newton Running shoes a fourth and final trial.

Why was I so stubborn to keep on running with Newton Running Gravity shoes? Whenever I put on the pair of Newtons, I immediately got good feedback on how my feet touched the ground. I felt the more natural support and it was closer to running barefoot. More importantly, I could feel I had a midfoot stride, but I noticed that I became a rearfoot striker near the end of my runs. This means I needed to keep paying attention on my gait especially when fatigue kicks in. Moreover, it allowed me to train doing a mindful body scan on my feet even wearing the more cushioned running shoes.

So, after the race I decided to give the Newton Gravity another shot, but this time following the advice to break the shoes in gently. However, I was not inclined to give up my good running fitness. Instead of cutting back on distance I decided to swap running shoes during training. The first week I started to run the first 1 km during my regular runs and 2 km on my long slow distance (LSD) runs in my Newton Gravity shoes while completing the rest of the run on my old pair of running shoes. I noticed no aches during and after all runs, so I increased the distance respectively to 2 km for and 4 km the second week. Again no pain, so I increased the distance covered on my Newton Running segments to 3 km and 6 km. I kept on increasing the mileage always with 1 km for my regular runs and 2 km for my LSD runs. Always starting out the run in Newtons, returning home and switching back to my old running shoes. I kept on increasing mileage until I reached 7 km and 14 km on Sunday in my Newton Running shoes while keeping the total mileage the same.

After that I transitioned slowly to an alternating running scheme. The first run of the week I would start the first 7 km in Newtons, completing the training with old shoes. The second training I would increase the distance on my Newton Running Gravity shoes again by 1 km. So first 7 km, then 8 km, until I completed the run totaling 17 km. The third run in the week, I decreased running in Newton Running shoes from 7 km to 0 km in Newton running shoes. I didn’t run any long slow distance runs these weeks. During this transition schedule again I felt great and had not even a single pain or ache. It felt that I’d become a better midfoot striding runner, always sensing how my feet touched the ground regardless of the pair of running shoes I wore.

Afterwards, I reintroduced SLD runs and switched to a bi-weekly running scheme such that for most training sessions I altered my different running shoes (A: Newton Running Gravity, B: Mizuno Wave Rider). Using this bi-weekly rotating scheme, I ensured that each pair covered around the same mileage and was used for various and similar training stimuli. This way, I slowly built up my SLD runs and in the spring of 2019 I was ready to run a sub-three marathon, but most importantly after a completely pain and injury free preparation.

Up until now, I’m still running pain and injury free spending more time on my feet (see the zoned bars) and covering more mileage (marked by the black dots) than I ever did before. 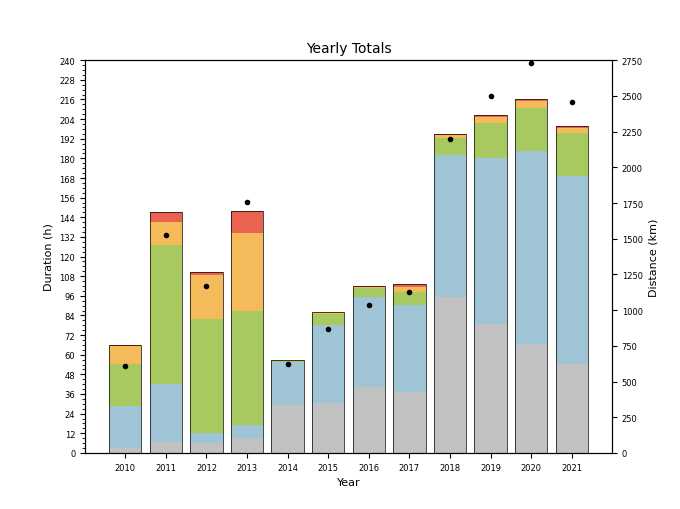